Scott has a Birthday 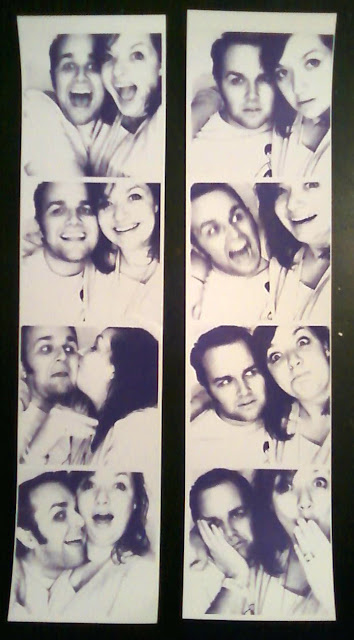 Thursday was Scott's birthday. Georgia was absolutely bananas the whole day. Scott had 2 tests and was trying to get all of his school stuff together in order to skip his last class so I could give him a good birthday. I felt so bad for him as he left all stressed out.

"Happy birthday!" I said as he shoved things in his backpack.
"I can't even think about my birthday until three pm!"

At three, I dropped Georgia off at the baby-sitters and whisked Scott off to Rodizio Grill to use his birthday coupon. I could tell right away that this was something he needed- something he had been missing.

He opened presents*  but he said I had already given him the best present, which was finding a way to let him pick out the hymns for sacrament meeting on Sunday. He's easy to please.

After eating way too much meat, we pretty much rolled out of the restaurant and headed to Boondocks. Scott had been talking like an 11 year old boy for MONTHS about going to Boondocks on his birthday. He found out that he could get a free unlimited pass and the idea of never-ending go karts really got into his head. I actually got an unlimited pass too, just to share in the fun. When we got there we were playing in the arcade when whatdoyouknow- his old mission companion and pretty much favorite person in the world shows up! Hmm... I wonder what awesome wife arranged that sneaky surprise surprise?

At one point, Scott and I went on the go karts, and there was no one else on the track or in line. The guys running it let us just keep driving for like 20 minutes. There's something about arcade games and go karts that can really reconnect a couple. I think it has to do with the nostalgia of our old dating days. On our way home, Scott took a sip of his Dr. Pepper and said: "I feel like myself again."

Bam. Birthday mission accomplished.
But it wasn't over.

Friday night, I had my MIL take Georgia overnight so that Scott (and I) could sleep in for the first time in what feels like years and years. We didn't go anywhere fancy- just walked around downtown and talked and held hands and cuddled in the car. Like I said, dating nostalgia.

I really think Scott had a happy birthday. He seems so much more loose and relaxed than before.

Here's to the next year, my love: May your shoulders have no knots, may your classes be passable, and may you know that I will always, ALWAYS ride the go karts with you.

temple bag, new J.K. Rowling novel, national parks passport and a box of Gushers for those of you interested
Posted by Carrie Lynn at 10:27 AM