I promise, I have made a lot of things that I could have been blogging about every Monday. For some reason, weekly features are always so hard for me to remember! To rectify the problem, I already have some Made it Mondays scheduled, so it will be more consistent. :)

For our anniversary, Scott and I decided that we were going to do handmade gifts. I showed up to The Melting Pot (for free cheese fondue) carrying this box 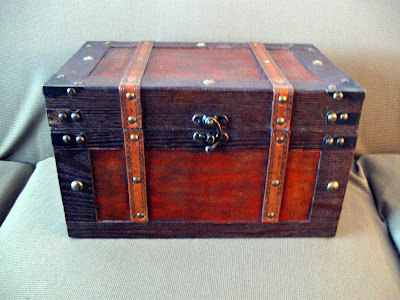 and was surprised by some beautiful roses on the table that Scott had prearranged to be there. He never does that sort of thing so I was absolutely twitter-pated. He told me that MY gift couldn't be given at the restaurant*, but I handed him HIS gift, and he was pretty pleased by what was inside.

This is Scott's "bad day box." I got the idea off the internet and my neighbor, who had made one for her husband. It's not exactly the most "handmade" thing- but the gift I wanted to make fell through and this was the next best thing. He was pretty amped by the stuff. I don't think I would normally name everything I got him for fear of sounding like I was bragging or something, but I think that, in this case, the "stuff" describes Scott pretty well. 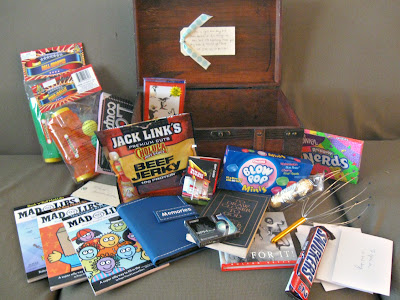 The tag says: "This is your bad day box. There are lots of fun things in here that will hopefully make your day better and remind you that we love you so much!"

Contents:
3 Books of Mad Libs
A photo album of his family
Candy (Snickers, Nerds, Blow Pops, Gum, )
A head scratcher
Inspirational book (To Draw Closer to God by Henry B. Eyring)
Inspirational photo book (Go For It!)
Beef Jerky
Love Coupons
Plastic "shooters" (toy guns that shoot balls- one for him and one for me)
In 'n' Out Burger gift card
Nielson's Custard gift card
Cards that I wrote him to remind him that he is doing great


Some things, the head scratcher and books, I had around the house. I think my favorite is the photo album. One thing is for sure, Scott has already used his box- eating one piece of beef jerky at a time and thumbing through all of the things that make him happy. Seems just opening it makes him feel better. And that makes me feel like a million bucks. 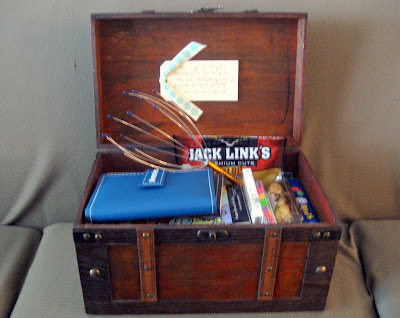 *For my handmade gift, Scott wrote me a song. I loved it. He said I can upload a video of it as soon as he perfects it. It's pretty silly and so great. What a wonderful guy.