Made it Monday: My Diaper Bag Pouch System

After having Georgia, it didn't take me very long to start loathing my diaper bag. Don't get me wrong- I had picked it out carefully. Found one with plenty of pockets and gender-neutral enough for Scott to carry around.

I have since bought a couple of big, fat purses that I have thrown all of my diaper bag stuff into. While they look cute on the outside, they were not so cute on the inside.

When we were in Boise my mom mentioned how my keys were all up in the diapers and how unsanitary that is. Then she said: "Carrie doesn't like an organized diaper bag."

Excuse me? I don't LIKE it? How about, I'm not capable of it?
Then I got all determined and made what I call, the diaper bag pouch system (which isn't really a system. Just a couple of pouches, so...).

I got to sewing to first make my diaper/wipes pouch. Then I sewed some more to make two drawstring pouches. 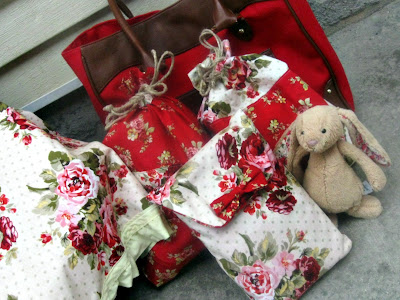 One drawstring pouch is for extra toys, a change of clothes and burp cloths. The other is for bottles, formula, and snacks.

Then I got a little carried away with some extra fabric and made a matching car-seat cover because sometimes I get matchy-matchy. Not always. But sometimes. 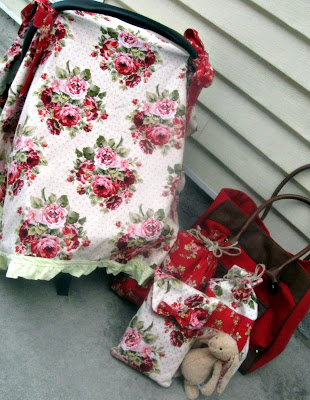 I think that any mother-to-be would love a set like this, don't you? Even if they have a real diaper bag.

My keys and wallet still get thrown in my purse, but it's nice to not pull out my keys have a big attached to them. And with the diapers all snug and protected, we are avoiding any weird disease that Georgia has been spared from in past.

It all may sound pretty simple, but this has really helped me have an organized bag. And guess what, Madre?