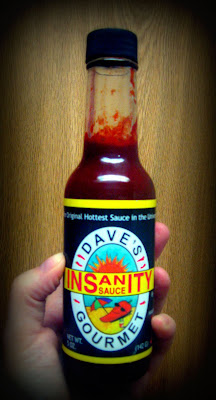 You should know that Scott and his family love hot sauces and hot, hot food. I don't know many men who DON'T like liquid pain in their dinner, but I prefer to stay away from it, myself. I don't believe Scott when he says habanero has a flavor. I just don't believe it. All I taste is pain. But he loves it.
So I got him Dave's Insanity Sauce for Christmas. It's the only hot sauce to have been banned from the National Fiery Foods Show. Whoever decided to put that little FYI in the description should get a raise because I was sold.
It came late in the mail and was delivered to us last week by our dear friends/ex-neighbors who came to visit us. Scott tried it. I expected him to say something like: "yeah, that's hot, but the flavor is great!"
But that's not what he said. In fact, he didn't say much at all. Just "wow" over and over again. And he looked like this: 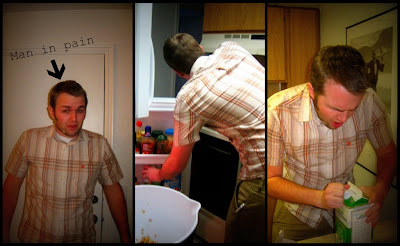 The point is, I tried a toothpick dip portion and it burned my face and throat off and I hated it. This Insanity sauce is insane because it is not used to flavor food. It is used in our house a novelty item. My father-in-law was ticked off that he couldn't taste his taco through the pain, and my brother-in-law was literally astounded that he was affected at all (he used to live in India).
The point is, I don't understand bottled pain, but if you have men in your life that love it- you need to get them some of this stuff.
Posted by Carrie Lynn at 12:00 AM