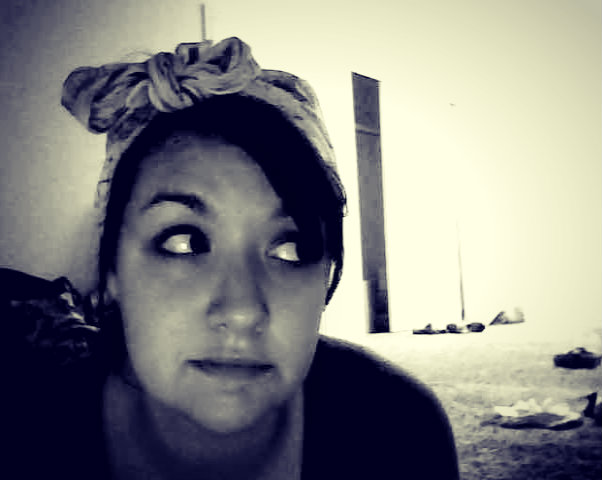 I spent November 1st moving our stuff to the apartment above ours. It's sadly vacant of some awesome people (boo Rachel and Craig moving), but it has ample sunlight and a slightly bigger kitchen.

WHEN we were going to move in was kind of vague. November 1st was assumed but not solitified until yesterday. Of course, November 1st fell on a day when Scott wasn't going to be home until 10pm.

I made a plan to move all of my little stuff (the front closet, decorations, kitchen) upstairs today. After I got a babysitter for Georgia (Erica is a saint), I moved the front closet. This was very unsatisfying. Took me way too long and the new apartment still looked empty while the old apartment still looked full.
I realized that it wouldn't feel like I'd gotten anything done until I got the furniture out.

My options were either wait until Saturday, or put on my big girl panties and do it myself.

I somehow got my 6 person kitchen table up 2 flights of (small) stairs ON MY OWN and Scott came home for 10 minutes between work and catching the bus for school and helped me with the couches. When he left, I got to work on moving my (massive) coffee table and did that. My (gigantic because it's old) tv was probably the hardest thing (too big to carry easily, too small to drag) to get up the stairs... and then I decided I was going to move my bookshelf. My 3-4 feet wide, taller than me and solid wood bookshelf. It took grunting and sweat, and about 15 minutes, but I did it. And I didn't even put a hole in the hallway!

Reading this, these things might not seem like that big of a deal. But I honestly have not felt this good in a long time. Becoming a stay-at-home mom has put me in a lot of situations where I have to wait on other people and it felt exhilarating to do something MYSELF without having to ask anyone's permission or wait for anyone to show up.

Granted, I moved as much as I did because my neighbor watched the baby all day but still. I felt all empowered- like Rosie the Riveter (I wore a bandanna all day) or Liz Lemon (I also wore sweats).
My stuff is now in between two apartments and that ALSO made me feel like Liz Lemon and I kept day dreaming about having a stairwell between the two and writing for a comedy show and living her life. Then I felt more like Hazel than Liz, but I digress.

The point is I started at 8am, moved a bunch of big ass stuff and now I'm sitting in a living/dining room that is pretty much empty except for a pair of shoes and some in-and-out packaging.

Thanks November, for starting out awesome.
Posted by Carrie Lynn at 9:28 PM
Labels: Family