April 1 is sometimes not what you think. 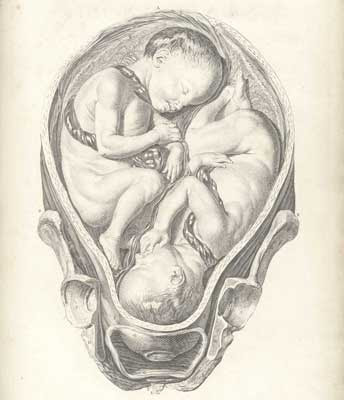 Today, Scott came home from work for a few minutes so I could have the car. When I was taking him back to work I got a phone call.
"Scott- roll up the window it's the doctor's office!"
The lady on the other line told me that Scott and I needed to come in because the ultrasound tech that did our baby's gender ultrasound was bothered by something and wasn't sure if there was TWO babies bouncing around in my uterus.
"But everything's okay? There's nothing wrong?"
"No, no, we just want to make sure we know how many babies we have in there!"
I relayed this information to Scott who was listening intently anyway. A smile grew across his face.
"It's April Fool's!" he shouted proudly.
I smiled too.
"Susan! Is this an April Fool's joke? Do you do this to all of your patients?"
She laughed.
"I realize this is probably the worst day to be doing this to you but no, it's no joke. We just need you to come in for a quick ultrasound."
My face dropped. I got flustered.
"Okay so tomorrow?"
"Tomorrow is Saturday."
"Sorry- I'm distracted..." I fumbled opening my planner. "Monday then?"
Scott was quiet. He said to do it as early as possible in the morning.
We set up the appointment.
I hung up.
"HOLY! CRAP!" Scott yelled.
He yelled it over and over again.
"Well, I mean it makes sense, honey. I AM really big and this would explain the stretch mark I found this morning..."
"Yeah," he agreed, "and I noticed that your belly moves on BOTH sides when the baby kicks."
Scott continued his "Holy crap!" exclamation and hit the steering wheel. He was smiling, but he was hitting the steering wheel and yelling. I asked him what we were going to do. He didn't know what to do with twins any more than I did.
Then, his mom came out of his work and Scott leaped out of the car.
"MOM!" he shouted across the parking lot, "We're probably going to have TWINS!"
My mother-in-law stopped in her tracks and her jaw hung open. I watched from the car. Scott explained in about 2 seconds and one sentence the call we got just minutes earlier. I saw my mother-in-law's face change to skeptical. I jumped out of the car to reassure her.
"APRIL FOOL'S! It wasn't Susan from the office, it was ANNA! I had her call and pretend to be Susan! I GOT. YOU. SO. GOOD!"
I was jumping up and down. Scott fell down and my mother-in-law cracked up laughing.
I'm just saying. That went better than planned.
Posted by Carrie Lynn at 4:03 PM